I was invited to a holiday fundraiser called Happy Hour for Hope, a holiday fundraiser to raise funds for families living with & affected by HIV/AIDS. The organizer, a social worker from UCSD, participated in this event because “HIV presents many challenges for women, children, and families. In addition to health problems, many also face economic instability, sub-standard housing, inadequate education, and domestic violence.” This was something I could definitely support. I just didn’t know that going to this event would bring my uncle into my mind so intensely.

He died many years ago due to complications from AIDS. I was in high school then. It was hard losing him. It was the first real death I experienced at an older age  — one I could comprehend.

In honor of World Aids Day, I will commemorate his memory.

I remember when we first found out he had HIV. The anger clouded the shock. He told us he contracted it from a lover who knowingly gave it to my uncle. He knew he was infected and didn’t wear protection. He let the disease flow from his sickly phallus into my uncle’s vibrant and alive body.

My brother and I wanted to find this man, and enact our revenge, not really knowing what that looked like. But it felt right…, the anger, and the hatred.

“What about the police? Let’s report it!”

We wanted his name, we wanted justice! But my uncle calmly told us that he moved past it and forgave him. He never outed this man. I didn’t understand it then, but I understand it now. Forgiveness and acceptance are such vital aspects in my life, even though it can be hard to practice them.

We respected his decision, though difficult. I guess anger was easier to feel than sadness. The realization was, he was going to die, and we couldn’t do anything about it.

As the battle ensued, his color diminished to pale. His bones and skin switched spots. His pounds dissipated into the floor. His lungs shrank, making it hard for air to escape. His vivacious energy waned like a light bulb about to go out.

But his smile, his smile was never taken. You could rip out his teeth and hollow out his mouth and he would still have the most beautiful smile. His smile would jump on your mouth and replicate it in you.

So at the fundraiser, for the first time in my life, I did what many around the world do — I lit a candle for those who have passed. I always thought it was a beautiful sentiment, but I never tried it. I push the topics of death away. I store them deep in my mind and shroud them in denial. But today, I finally spoke to death about my Uncle Randy. I lit the candle to cast away the darkness death held and wrote my Uncle a note. Surprisingly, it felt healing.

God, heaven, and all that other junk never crossed my mind. I didn’t believe it then or now. No solace in those thoughts. I knew his molecules would feed the worms and birth some form of nature.  The solace I had was that my mother eased his suffering as he passed peacefully. His last breath was in my mother’s caring and loving arms.

You died but you created memories I play in my head often: my first NBA game watching the CAVS lose by 20 points because Lebron was still in Middle School at that time. I remember the expensive haircuts you bought us and the shopping sprees you happily spoiled us with.

Thank you for teaching all of us forgiveness and acceptance.

And most importantly, thank you for leaving me your smile. Rest in nature, Uncle “Buck”. 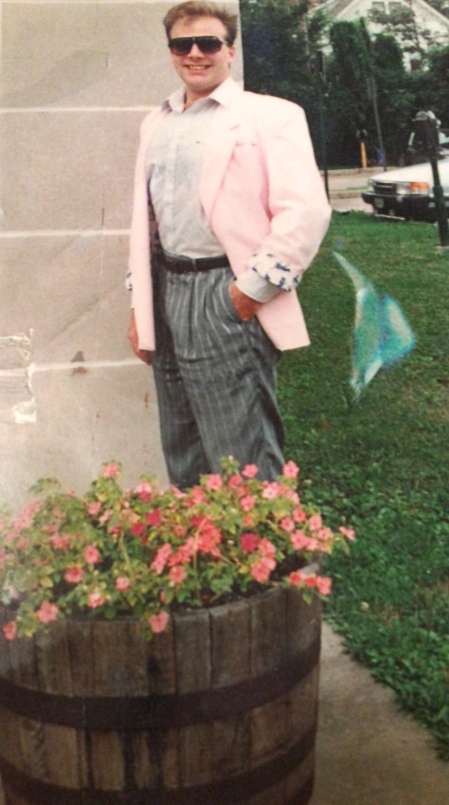 Leave a Reply to Just Another Human Cancel reply