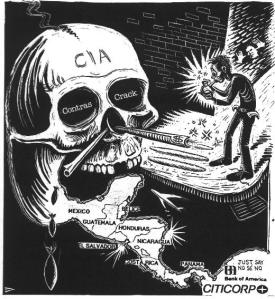 The War on Drugs has been scientifically proven unsuccessful in its goal. In fact, it seems that it has even had the opposite effect. This policy has had a negative health and social impact. The purity of drugs has been enhanced while drug prices have become lower, according to international surveillance systems (The price and purity of illicit drugs, 2004). Since the 1960s, $2.5 trillion dollars have been spent on the War on Drugs (Suddath, 2009).  Yet with this influx of funds, drug law enforcement doesn’t reduce violence but adds to it. Eliminating chief members within the illegal drug market creates new positions for others to fill (Wood, Werba, Marshall, Montanera, and Kerra, 2009).  Disturbing drug systems can amplify violence levels (Wood et al., 2009). Eighty-seven percent of studies done on the impact of drug law enforcement determine that the increased drug market violence is directly correlated with heightened drug law enforcement (Wood et al., 2009). 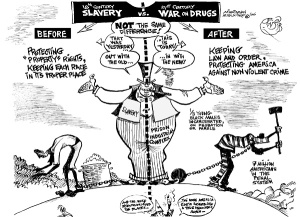 The money spent on the drug war has also gone to anti-drug Public Service Announcements (PSAs). Numerous drug campaigns such as “Just Say No” and the DARE school program discouraged drug use. However, the proof that these PSAs are successful is lacking and there is not enough verifiable data that shows they prevent youth from using illicit drugs (Werb, 2011, p.839).

The main focus with the drug policies of America is enforcement. Drug users are imprisoned and this has had negative social impacts in our society.  When Regan signed the Anti-Drug Abuse Act of 1986 it created substantial racial differences in the prison population (America’s war on drugs, 2007). Crack is cheaper, so those in lower income classes tend to buy crack since powder cocaine is too expensive (America’s war on drugs, 2007).  Due to drug law violations, 1 in 9 African-American men between the ages of 25-29 are imprisoned every day according to the Bureau of Justice statistics (Sabol and Couture, 2008). The U.S. has less than 5% of the world’s population yet has 25% of the world’s prisoners (Liptak, 2008). The War on Drug policies has played a pivotal role in massive incarceration rates (Liptak, 2008). In 1980 40,000 people were in jails and prisons due to drug crimes, but as the War on Drugs progressed, by 2008, 500,000 people were in jails and prisons because of drug crimes (Liptak, 2008).

3 thoughts on ““War on Drugs” is War on Sanity”