How to Support TZM

As a supporter of TZM, you can join the San Diego Zeitgeist Chapter and became a member. Through the chapter, you can participate in various events such as “Zeitgeist Day” (Zday), Beach Clean Ups, One Planet Project, Zeitgeist Townhall meetings, and participate in tabling activism. Every week members meet at coffee shops or private homes to plan and propose events. One example is the planning of Zday in San Diego, where we discussed a location to hold the event, what time we would hold it, and who would provide the lectures. The goal of Zday is to raise public awareness of TZM and takes place every year in the middle of March (About, n.d.).

The first Zday took place in 2009 in over 70 countries, with over 450 events (About, n,d,). In 2010 and 2011, the average amount of Zday events that took place was about 300 (About, n.d.). The San Diego Zeitgeist Chapter holds most of their events at Joyce Beers Community Center in Hillcrest. Several Zeitgeist Chapter members hold presentations ranging from topics on technological unemployment, the media enviornment, economic trends, sustainability, and on applying the scientific method to our social system. In addition, as one of the coordinators, I performed three monologues highlighting many of the detriments within our monetary system, American “democracy,” and movements of civil disobedience. About 30-50 people came to our event and we acquired new members in the process. In addition, Dylan Ratigan, former MSNBC host, spoke at a Zeitgeist Townhall meeting in San Diego on April 26th 2013. He spoke about the future of America, veterans, and sustainable agriculture.

One Planet Project is a TZM campaign in which we engage the local community (Campaign, n.d.). We interact with the public asking them easy multiple choice questions on renewable energy resources, unemployment trends, and on poverty statistics (Campaign, n.d.). We take down their emails and send them an information package which contains documentary links and description of TZM’s objectives (Campaign, n.d.). The San Diego chapter performs this through tabling activism at Balboa Park or Ocean Beach roughly every weekend. We set up a tent and tables with information on our organization. We put out free DVD documentaries and pamphlets for people to take, and have a 3D circular city on display that shows how a city could be structured with today’s technology. On the model city are sections that illustrate localized vertical farming areas and renewable energy sources such as solar panels. To compliment the city are technological and scientific articles that illustrate the current use of vertical farms, 3-D printing, and examples of cities now using renewable energy resources. Most importantly we have discussions and answer questions when passersby come to our tent. By engaging the public through street level/tabling activism we are able to spread awareness and show our presence. 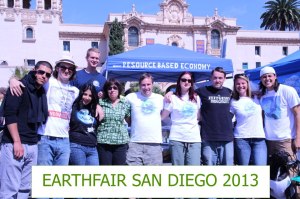 3 thoughts on “Grassroots Activism in the Zeitgeist Movement”