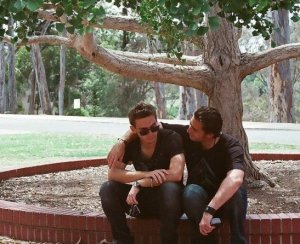 It has been said that Jupiter, for the most part, has allowed for life to exist on earth. Long period comets aimed at earth have been blocked and absorbed by Jupiter thus allowing for intelligent life to thrive on our mother earth.

My brother is my Jupiter.

As far as I can pull out the explicit memories from the corners of my brain, my brother has always been my shield.

I was forced into a pre-school prison as a young child. But I was able to accept the eviction from my mom everyday because I knew my brother would be the one picking me up.

Fighting off Miami's hot breath, he would grab my young hand and would save me from the care of the day and take me to watch movies. It was our weekly tradition. He was the fountainhead for my love of cinema and music. 26 years later we find ourselves breaking down movie plots and listening to music for hours deciphering lyrics.

As a child, I wished to be my brother’s mirror. I mimicked his sounds, the expressions he created, and wanted to partake in everything he did.

As we grew older, his sheep's coating began to turn black and he became troublesome for our parents. Walking the line, accepting rules for rules' sake, and exhibiting monochromatic tendencies were concentrated forms of insanity for my brother.

He shook and spit on the line while making his own rules. My brother has always been a manifold of colorful wavelengths.

He put the 'quo' on a plate of 'status' and devoured it.

In his journey of self-discovery he made several mistakes. Many in the family were worried I would follow in his footsteps because I was a sponge to my brother's life. I soaked it all in, soaked it to the very last drop, all in hopes of being at most, a slice of him.

But he didn't let me.

He made me carve my own path. He always told me, "I made these mistakes so you don't have to." I wanted to make him proud so I did exactly what he urged me to do, succeed in anyway that I wanted to.

There was always an undercurrent of sadness in him because he saw more pain than I did. He had many hard-won victories. He used that experience and etched it in me. He taught me so I could teach him.

He came a long way since he was younger. He used to constantly fight, he ran away from home, and became part of America's high school dropout rate.

Now, he still fights, but no longer with his physicality. Using his cognizance, he battles against the cabal of apathy and injustice. He continues to run, but runs home to the family instead. A ripple of realization hit him and with great fervor and allegiant focus he went back to school and inherited a diploma.

He took that youthful violence and turned it into a passion of sustainability: an artist of the soil, a self taught micro farmer growing organic produce and sharing with his neighbors for nothing in return.

He is a magnet of warmth and love. When entering a room eyes have no choice but to lock on to him, people must follow his direction. He sets the pace. Everyone wonders what it is about him that is so alluring. Everyone has a theory or reason, but no one could ever know. We all just understand there is something that sets him apart from the crowd, the commonplace, and the ordinary. We all know that we just want to be part of his ecosystem, because it makes us feel special. Just knowing my brother by his handshake, you begin to suspect his importance.

More than a mentor, my brother has always been my castle. As long as I was with him, abuse could not follow me. It was diverted, discouraged, and got lost on its way to find me. Little did he know that his presence alone struck fear in the enemy of abuse: an enemy that would never dare attack so long as I lived in the castle.

When in gutters of despair, rest assured my brother will heave, jerk, and yank you out. When cortisol pumps throughout your body and cyclopean trees fall and block your path, my brother is somehow able to handle it.

He is the alpha male without the violence, domination, and competitiveness. He is a lion without the bestiality.

In order to make a brother like mine you need to mix 1 part poetry, a bit of philosophy, a dollop of compassion, pounds of strength, pieces of charisma, slabs of empathy, and slivers of humor with masses of love.

He masters the power of the now and by example, exposes to others the possibilities of having convivial lives.

As victims of circumstance, we have been separated from one another due to divorce. Lands and oceans have kept us physically detached but we are brothers; 2 parts to the same soul, heart, and mind -- separated by distance but still always closely combined.

I am he, and he is me. Proud to say I know him as a human being, but even more proud to say he is my big brother.

***Thank you for taking the time to read my work. If you enjoy what you read; please share, like, and comment. All of these details help me drastically and will allow me to write more often. Thank you for your support!***