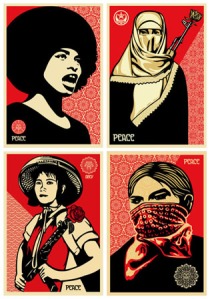 I want a revolutionary bitch.
Scratch that, I want a revolutionary chick.
A bitch is an insult, a sexist, derogative, and dividing term.
The suppression of women, it reaffirms.
An assertive and intellectual chick
Not too skinny and not too thick.
Open-minded, emphatic, and not repressed.
One who’s secure with herself and willing to get undressed.

Not scared of society’s judgement.
Appeasing her natural inclinations responsibly and doesn’t
mind opening her mouth and spreading her legs.
Not afraid of discontinuing the fertilization of her egg
cause it’s her body, her choice.
If she makes that mistake, in the end, it’s her voice.

Does it consciously because she enjoys it
not to get attention or to submit,
to a man who sees her only as a sperm depository.

A chick who keeps the lights on during sex.
Makes sure she protects
herself and makes him wear latex.
Doesn’t cover herself in shame,
but allows her lover to appreciate her body in acclaim!

A hippie chick who says fuck the system
But still shaves her armpits in custom.
No reason,
she can’t be revolutionary
and still smell delicious,
with her skin basking in its softness.

One who can love without conditions
Doesn’t mind where my dick’s in.
So long as we base us on honesty, respect, and love.
Relates without the relationship, far above
any jealousy issues.
Or sexual and religious taboos

We can talk about Fuller, Sagan, Joseph, and Fresco.
Do what we can to alleviate the pains in the ghetto.

You appreciate Mother Nature
and understand the values of our culture
need to change somehow.
Or pollution, war, hunger, and poverty, we will allow.

You create revolutions not only in my mind but in my boxers.
Leaving me satisfied and flustered.

You aren’t Democratic nor Republican,
But an educated woman.
You realize they are two heads to the same monster
Who sell the people out for the corporate vulture.

When you talk to God
You say, “oh God!”
And not in the church but on my bed.
With your legs widespread
Creating a love and joy so intense
that our togetherness conceives a new life sequence;
a new big bang, new atoms, a new solar system.
Together we are life’s rhythm.

***Thank you for taking the time to read my work. If you enjoy what you read; please share, like, and comment. All of these details help me drastically and will allow me to write more often. Thank you for your support!***